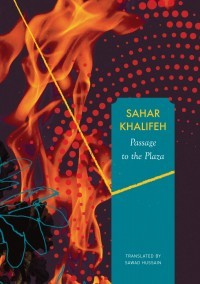 Passage to the Plaza

Translated 30 years after it was originally published in Arabic as Bab al-Saha, Sahar Khalifeh’s Passage to the Plaza is a fast-paced novel that follows a multi-generational cast through the first Palestinian Intifada. It is written from a predominantly female perspective by three women protagonists, and sheds new light on a gendered experience of the 1987-1993 uprising.

All three women are forced together by a curfew that becomes increasingly claustrophobic as the novel progresses, and struggle with the gendered restrictions created by the patriarchal society in which they live. Sitt Zakia is a devoutly religious, elderly, single midwife, who has been abandoned by both her ex-husband and children. Despite her experiences, however, the quarter’s mother figure struggles with but is unwilling to upset the patriarchal order.

In one agonising scene that typifies both the callousness with which Khalifeh’s characters treat each other as well as Zakia’s unwillingness to challenge the social order, the midwife refuses to shelter her maltreated, neglected sister-in-law. Instead, she tells her to learn to bear being abused by her husband: “My opinion is – and now don’t get upset with me Um Azzam – that you should go back to your house and be a decent wife. Don’t blame me for this, but people like us, women, we only feel at ease in our own homes. Your whole life you’ve been so patient and discreet. And after all this time, after your boys have become men, you leave your home, Um Azzam?”

Then there is Samar, a young, well-meaning university student who is researching how the Intifada is affecting women. The only girl in a family of men, however, Samar feels more repressed by her life at home than by Israeli soldiers, who she is unafraid to fight. “When the soldiers had hit her,” writes Khalifeh, “she had fought back, bringing down the wooden plank in her hand on them, and anything she could find to strike them with. But now, [being beaten by her brother] she was just a dinghy tossed by the waves and squalls… She was disgusted by everything: by him… How easily he had forgotten their shared secrets.”

Khalifeh’s third and most complicated protagonist is Nuzha, an embittered, lonely and sharp-tongued woman who has been ostracised by the quarter’s residents for engaging in sex work. The 27 year old is trapped by her failure to adhere to gendered societal expectations and believes bitterly that, as a man, she would have been judged less harshly for her sordid past, just as her younger brother, Ahmed, has been.

Far from what the reader might expect, the three women’s problems divide, rather than unite, the unlikely trio, and they spend much of their time in conversation, debating their issues. This format often makes Khalifeh’s book read more like a stage play rather than a novel, but it platforms the issues with a male-dominated account of the Intifada in a surprisingly effective manner.

Passage to the Plaza documents how some women in Palestine faced oppression and danger as much from within their own homes as at the hands of the Israeli soldiers, but shows that their yearning for female emancipation still ran in parallel with the desire for Palestinian freedom and statehood throughout the Intifada. This is quite likely still the case, so far from being outdated, as I had imagined, this newly-translated edition of Khalifeh’s book is a literary triumph that is probably as relevant now as it was when it was first published.