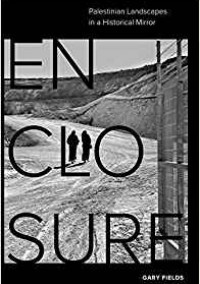 Gary Fields’ Enclosure: Palestinian Landscapes in a Historical Mirror is a unique exploration of the development of the Israeli culture of land grabs and the historical legal framework and precedents that have allowed Zionist policies to continue unimpeded.

Inspired by the author’s own trip to the occupied West Bank 15 years ago, the book compares the Palestinian story of Israeli land seizure to the early modern enclosures of land in England and how such a system was replicated in the Anglo-American colonial frontier. Two chapters are dedicated to the partitioning of land in each of the three regions respectively, retelling not just a story of Israeli aggression but of an imported strategy of settler colonialism.

Complete with vivid maps and diagrams of changing landscapes, Enclosure argues that land division is a “historically recurrent pattern of power”, and in particular how the reallocation of property rights is a deliberate strategy to dispossess the Palestinian people.

Fields identifies three ways in which those in power across all of the locations he mentions took control of the land: maps, law and landscape architecture. He emphasises that the reasoning behind enclosure was always cited as improving the land, although the actual objective was possession.

The author explains how maps and cartography allow land to be reimagined by the illustrator, providing would-be land owners with a graphic picture of how dominance can be fulfilled. This enabled settlers to make strategic choices that would contribute to achieving sovereignty over the land. He describes how, just like estate owners in England and colonists in North America, Zionists used maps to promote a national imagination about Palestine as a Jewish land.

In the case of Palestine, Fields documents the usage of the landscape from the Ottoman Empire, tracing how various legal changes and the status of the land was subsequently rejected during the British Mandate period with increased Jewish immigration. According to Fields, a lack of sovereignty over the land made the Jewish migrants deeply “uncomfortable”. However, he notes that the situation changed drastically after the 1948-49 war, after which the nascent State of Israel took over sovereignty of some 78 per cent of Palestine and rehashed it as their own state.

Israel then took control of creating a system of land rights which categorically disqualified Palestinians from having ownership of land, and reallocated it to Jews, a clear example of using the law to fulfil an unmistakably military objective. Towards the end of 1949, explains Fields, a “place-names committee” was also created within the Israeli Prime Minister’s office, advocating openly for the change of the Arab Palestinian landscape and cultural heritage to one more palatable to Israeli Jews. This, according to Fields, is an example of “lawfare”; the law became a weapon.

With regards to landscape architecture, Fields draws parallels between the establishment of Jew-only spaces on the Palestinian landscape, to norms that converted common land in England during the 15th century to private property and, in the case of the Americas, native-owned land to white European-owned property. He describes an array of methods that were used in all three cases to take possession of the land, from fences and walls, to occupation and all-out war.

Fields mentions in particular the case of the Palestinian village of Al-Araqib, well known for being demolished repeatedly by Israel. Describing its status prior to Israeli control and how Zionism manipulated its position to displace the tribes living there, the book contextualises the state’s current and persistent campaign against the region and its inhabitants, considering them a threat to Zionist sovereignty.

Photos from the author adorn the pages of a heavily referenced book, which features extensive research into scholarship, basing much of its arguments around the theory of property rights as put down by John Locke. Rigorously referenced, the historical proof of Fields’ argument cannot be denied.

Enclosure is unique in providing the evidence of how the current campaign against the Palestinians is oriented upon a worldview based on supremacy and fundamental inequality. Human rights, including a right to property, are not considered universal in the examples given; they are something to be claimed by and for the more powerful party. Despite this, the book ends on a hopeful note, recognising that the Palestinian story is not yet over, and that the capacity for future change remains significant.

This is a deep and intricate look at the history of Palestinian property rights and the continuation of a settler colonial strategy rooted in oppression. The book is a must read for any campaigner or researcher seeking to understand how Israel justifies its occupation and land grabs within a legal and historical framework.