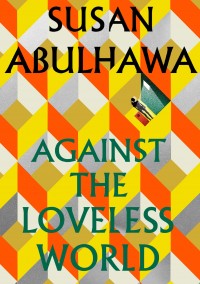 Against the Loveless World

The Nahr we meet some way into Susan Abdulhawa’s “Against the Loveless World” is a different one we imagine to the figure who sits in an Israeli jail cuffing her own hands to the wall and staring up at the black camera built into the roof of her cell.

The Nahr who grew up in Kuwait dances at parties and has sex for money so she can fund her brother’s ambitions to be a surgeon. She has a job considered demeaning for women – selling your body – yet she is a breadwinner for her family who stay afloat thanks to her.

And so “Against the Loveless World” opens as a series of contradictions. The contradiction of growing up in a culture where women are supposed to conform to certain ideals, rebel against it but can find themselves on a path that confirms these stereotypes.

It is a world in which Um Baraq is Nahr’s pimp yet gives one of her servants the savings she has siphoned off from her husband and instructs her to return to India and buy a house without adding any man’s name to it.

How did the Nahr – known to some as Yaqoot – who grew up in the seventies in the Gulf, who lived with her mother, brother and grandmother and once adored her father, land herself in solitary confinement, accused of being a terrorist? It is Nahr the narrator who leads us through her thoughts, feelings and recollections which when pieced together answer this question.

Besides the struggles close to home, Nahr must contend with the wider politics she is born into. As a Palestinian living in Kuwait she has never known her home country. Then Iraq invades Kuwait and she is accused of being a collaborator despite her protestations that she is a loyal citizen who even recited the national anthem.

She lives in exile in Jordan and later navigates Palestine, where she gets to grips with the Oslo Accords - areas A, B, and C - and visits her mother’s home that has been taken over by illegal settlers. Later, she muses over the fact that she cannot return to Kuwait and that there is no place for her in Amman. For a woman in her twenties, she has certainly lived through more than many others her age.

“Against the Loveless World” is also a story of hopeful, joyful moments and how they can come crashing down with so little warning. Of how her brother with a promising future gets captured and tortured instead. Of how Nahr finally finds joy with an unexpected partner, but the union is so fleeting and the aftermath so long.

Abdulhawa’s novel raises questions over how much of our life path is a choice and how much we are thrown into situations and circumstances over which we have very little control and the decisions we make as a result. Or as her friend Jumana says of her fellow female characters, “most of these women had ordinary lives, but life pulled the extraordinary out of them.”