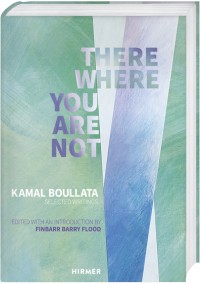 There Where You Are Not brings together the writings of celebrated Palestinian artist and theorist Kamal Boullata. Produced over four decades of exile in Europe, North Africa, and the United States, the essays explore intersections between aesthetics, history, and politics that are central to the historiography of modern Arab art.

This volume accumulates more than 45 articles written by the Palestinian artist, critic, and theorist Kamal Boullata (1942-2019), on topics ranging from art in Palestine, feminism and gender, language and the visual; to short appraisals of contemporaries such as Mahmoud Darwish, Rashid Hussein, and Paul Guiragossian. Before his passing, Boullata completed layout and design of this volume, but it was edited and published by Finbarr Barry Flood, founder-director of Silsila: Center for Material Histories, and author, among other titles, of The Great Mosque of Damascus: Studies on the Makings of an Umayyad Visual Culture (2000)

On the very day that Jerusalem came under Israeli occupation in 1967 “exile became a central reality in my life,” recollects Kamal Boullata in the opening passages of the colossal volume that brings together the writings of celebrated Palestinian artist. Only 25 years of age, as Israeli occupation forces rolled into the Holy City, Boullate...